ROCHESTER — One amazing goal got it started, and another stellar score put it away as Austin clinched it’s first trip to the Class ‘A’ boys state soccer tournament in school history. 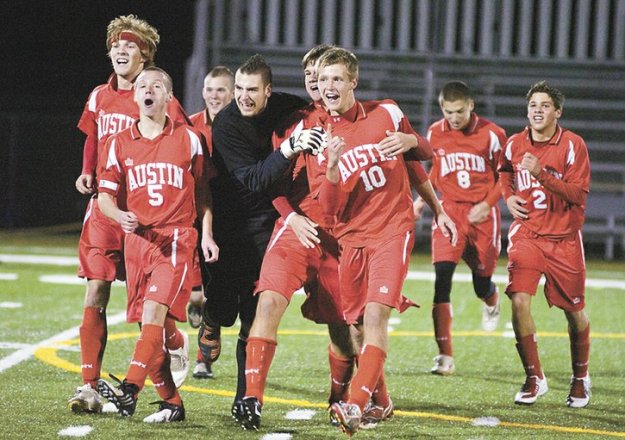 “This win is absolutely huge and we have an amazing team here,” Austin keeper Ryan Rasell said. “It’s probably the best that’s ever come through Austin.”

Junior midfielder Ronaldo Rubio gave the Packers (14-5 overall) all the momentum they needed when he booted a 30-yard goal from the corner that arced over the head of Lourdes keeper Will Elder to make it 1-0 Austin in the 15th minute.

“It was a ridiculous shot and it was great to get a goal in the first half,” Austin midfielder Jacob Brehmer said. “We capatlized on our opportunities and our defense played great.”

Rubio insisted that he was attempting a shot and not just trying to get the ball in the zone. But he was feeling some nerves.

“I was a little bit nervous and I didn’t actually think I would play this great,” he said. “It was very exciting for me.” 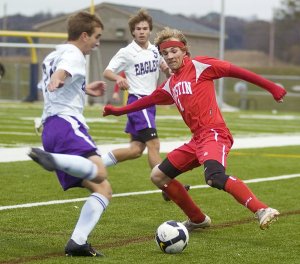 Brehmer gave the Packers all the breathing room they would need in the 55th minute when he bent a 20-yarder from the right side that landed into the left side of the net.

“They’re a heck of a team and they’re really ferocious, so I knew I had to kick it when I did, even though I normally can’t shoot from far out,” Brehmer said. “I just kind of swung at it and it went in.”

The Packer defense did a solid job of keeping Lourdes from getting any easy shots, but the penetration of Joe Charlesworth created some problems for Austin. Rasell made a diving save on a shot by Charlesworth with 10:24 to go in the match and Rasell stopped a header by Jon Tousley of Lourdes (14-5-2 overall) with 8:09 to go.

“I went for everything,” said Rasell, who had 14 saves. “If I thought I could get it, I went for it and everything seemed to stick this game. I held on to everything. I assumed there would be a lot of tough shots, so I prepared myself for it.”

Austin’s depth gave them fresh legs and it helped it close the match out as the Packers were able to keep posession for most of the second half.

“Every player on the bench can step in and play any role without a problem,” said Austin head coach Jens Levisen.

Austin has 14 seniors that will be enjoying their first trip to the state tournament. While many of them were on the U17 team that won state over the summer, this adds to that accomplishment.

“Our whole team has been playing amazing, it’s so fun to be part of this great group of guys,” Brehmer said. “The number of fans we had was ridiculous and it’s one of the best games of soccer I’ve played in.”

Austin, which had 11 shots on goal Saturday, will play No. 2 seeded Simley (17-1-4 overall) in the first round at the state tournament. The match will take place Friday at 7:30 p.m. and will be held in Roseville Area High School.

I serve as Minister for Women's Ministry and write Bible studies for the women of Bethlehem Baptist Church, North Campus.

Please pray for my dear friend Kathy and her husband as their home is where Ian is expected to make landfall.